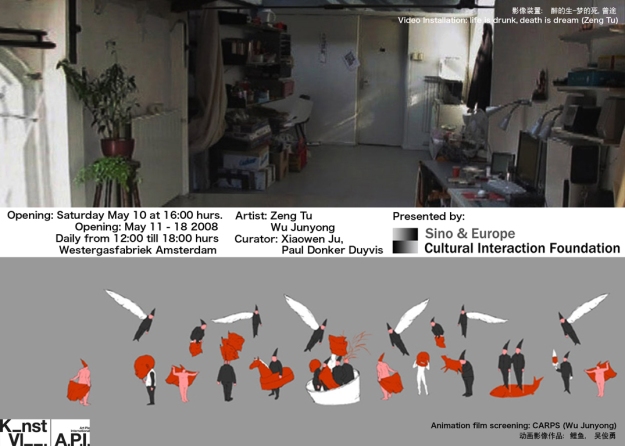 Besides from the KunstRai, where you can find a yearly overview of commercial galleries, the Sandberg Institute wanted to create an art fair showing other kinds of art i.e. non established art. The KunstRai did not approve of this idea, prohibiting the initial title ‘Not the KunstRai’ which thus instead became, ‘Niet de Kunstvlaai’ – ‘Not the Art Pie’, taking its place not in the Rai but in the Westergasfabriek.

Here artist initiatives from the Netherlands were invited to represent themselves with their best work. At the same time postgraduate studies similar to the Sandberg Institute joined in. This collaboration resulted in a lively, well attended art fair showing upcoming art; art not yet institutionalized, art looking for new ways. According to the response from the public and press, ‘Niet de Kunstvlaai’ was an unexpected success. It functioned as a spontaneous market: exhibiting artists were introduced to other initiatives and as a result could exhibit their work throughout the country. This enabled relatively isolated artist initiatives to gain more attention.

For the second edition the name changed to ‘De Kunstvlaai.’  Every edition since, De Kunstvlaai has been marked by something extra.  For the second, Dutch contributors were invited to introduce a foreign colleague next to their own presentation. Around twenty foreign initiatives ranging from Belgium to Indonesia were present. In its third edition, De Kunstvlaai highlighted the work of young artists who recently received a stipendium from the Netherlands Foundation for Visual Arts, Design and Architecture (Fonds BKVB).  The fourth became a platform for the first One Minutes exhibition and The One Minutes Awards ceremony.